.
A new form of self-assembling polymer film that bends and stretches when
hit by light is pointing the way to a new family of functional materials. This
flexing film is the first material to have been made by coaxing complex
molecules to form large-scale, highly ordered three dimensional arrays—a
discovery that could change the way that many active material are made,
from artificial muscles to solar cells.
.
Nobuhiko Hosono, Takuzo Aida and colleagues at RIKEN Advanced Science
Institute in Wako and The University of Tokyo developed the self-assembly
protocol. The researchers found that brush-shaped polymers would form
an orderly film when hot-pressed between two sheets of Teflon1.
.
They made their discovery while studying a polymer in which each side chain,
or bristle, of the brush structure incorporates light-responsive azobenzenes—two
benzene rings separated by a pair of nitrogen atoms. When hit by UV light, the
bond between the nitrogens rearranges, contracting the side chain.
.
The researchers used this photoisomerization behavior to confirm the remarkable
long-range order of the polymer structure. Because the side chains were all
aligned, when those at the surface were hit by light they curled up in concert,
bending the film. A second beam of light at a different wavelength reversed
the isomerization process, and the film relaxed back to its original shape.
.
The trick to making the material is to heat it between two sheets of Teflon that
have been drawn tight in one direction, says Hosono. This tension orients the
Teflon sheets’ internal structure along a single axis, which acts as a template
for the molten polymer brushes sandwiched in between. The side chains of
the polymer brush align with the Teflon, pulling each brush upright. As each
polymer brush aligns in the same way, it forms a repeating three-dimensional
array (Fig. 1).
. 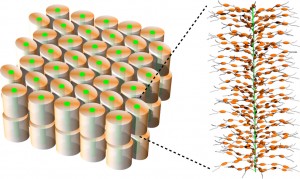 .
.
.
Figure 1: The light-responsive film is made up of polymer brushes (right
that have self-assembled into a two-layer, three-dimensional array (left).
.
Hosono, Aida and colleagues expect the technique to work for other polymer brushes
with similar side chains. To improve the artificial muscle-like behavior of their polymer
film, Hosono says the team will try cross-linking the polymer side chains. This will
prevent the molecular structure from becoming disordered as the polymer repeatedly
curls and relaxes over many cycles, giving the muscle a longer lifetime.
.
The team is already assessing other potential applications. The wide-area
three-dimensional molecular ordering of the polymer brush has great potential
for building electronic devices, says Hosono. “We now have designed a new
type of polymer brush for development of highly efficient thin-layer organic
solar cells.”
.