Hydrogen gas: Under pressure – Simulations have explained the peculiar nature of hydrogen vibration under high pressure

.
.
Most of our Universe consists of hydrogen atoms, which are often found
under extraordinarily high pressure as high as tens of millions of times the
atmospheric pressure of Earth. Understanding the exotic physics of such
a high-pressure regime will contribute to our understanding of planet formation,
hydrogen storage, room temperature superconductivity and other fields,
explains Toshiaki Iitaka from the RIKEN Advanced Science Institute in Wako.
.
Iitaka, along with colleagues from the Institute of High Performance Computing
in Singapore and the University of Saskatchewan in Canada, recently uncovered
the physical basis underlying a newly discovered behavior of hydrogen molecules
under high pressure.
.
. 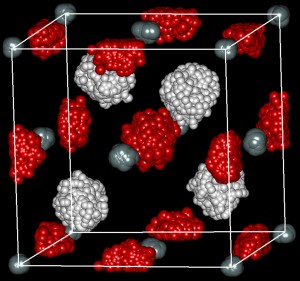 .
.
.
Figure 1: Traces of the positions of silane and hydrogen molecules over time
at 32 GPa, obtained from molecular dynamics calculations. Hydrogen atoms
at tetrahedral (white) and octahedral (red) sites are shown. Silicon atoms at
so-called ‘face-centered cubic’ sites are shown by gray spheres
.
.

This behavior was observed in a complex of hydrogen molecules, and hydrogen
bound to silicon, which is called silane. Silane’s hydrogen atoms are under
so-called 'chemical compression' by virtue of their being part of a chemical
bond. In 2009, physicists found that the vibrational frequency of hydrogen
molecules in silane–hydrogen complexes fell as the applied pressure rose.
This anti-correlation was the opposite of previous observations of high-pressure
hydrogen.
.
Iitaka and colleagues modeled the system using molecular dynamics
simulations. They first optimized the relative arrangement of hydrogen
and silane molecules inside a unit cell, finding that the hydrogen molecules
tend to sit at octahedral and tetrahedral sites (Fig. 1). They then computed
the vibrational frequencies of the hydrogen molecules, and found two
groups of vibrational modes, one at high energy and one at low energy.
.
The frequencies of the lower-energy group decreased monotonically as
applied pressure increased. However, the frequencies of the higher-energy
group increased with pressure until about 20.1 giga Pascals (GPa), after
which they fell. This reproduced the experimentally observed anti-correlation
between vibrational frequency and applied pressure, indicating that the
simulation was accurate.
.
The simulations also revealed that this rise and fall in frequencies resulted
from interactions between hydrogen and silane molecules. These
interactions resulted from the overlap between the filled electron orbitals
of one molecule and the empty orbitals of the other molecule. This overlap
stabilizes the system, and its strength depends on the distance between
the molecules. This distance, in turn, depends on the applied pressure.
.
The simulation results are another glimpse into the exotic physics that
underpins the high-pressure regime, according to Iitaka. “We have shown
that there is much more interesting new physics and chemistry to be explored
in the world of high pressure.”